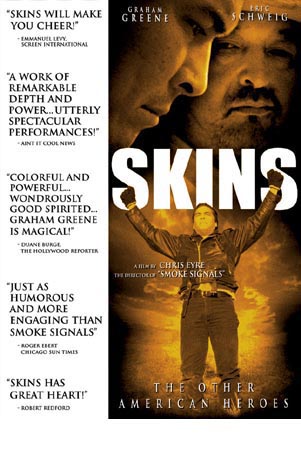 First published in 1995 and long out of print, this "explosive" novel (a 2002 First Look Pictures film starring Graham Greene and directed by Chris Eyre) is currently available in paperback edition from Ellis Press.

HERE'S SOME PRAISE FOR THE NOVEL

"Employing an incisive blend of satire, fantasy and grim realism, and aided by a good eye for detail and an ear for natural dialogue, Louis presents a picture of contemporary Native American life that is often as funny and warm as it is disturbing."
-Publishers Weekly

“Long a much-respected, important poet, Adrian Louis has turned his hand to novel writing -- and he does it with a bang. Skins will cause some ripples, both on and off the rez. It is a wonderfully written novel, filled with great characters, savvy humor, and true compassion. Adrian C. Louis is one of those writers we wait for and, believe me, he doesn’t disappoint.”
-James Welch 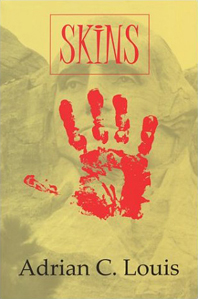 "Adrian C. Louis has written a violent and dangerous book about twentieth-century Sioux Indians. This novel is a complex portrait of racism and brotherhood, sexism and affection, murder and redemption, alcoholism and laughter. These are not the simple Sioux of “Dances with Wolves.” These are not 'Native' Americans. These are Indians (yes, Indians) living, dying, and loving on the Pine Ridge Reservation in South Dakota. Skins is about the love between brothers, men and women, parents and children. Believe me, despite all the pain and because of the pain, this is a love story."
-Sherman Alexie

"This is a fierce first novel, set not far from Wounded Knee - in the whirlwind of destruction set off by the collision of cultures. In this place are all manner of hellish tests, linked with a wicked humor. The telling is honest and stark, perfect for this raw and powerful tale."
-Joy Harjo

A SHORT REVIEW OF SKINS IN WORLD LITERATURE TODAY

"A SIMPLE TRUISM in the contemporary world is that the worst film will affect greater numbers of people than the best book. The book Skins is being republished on the occasion of the release of the film of the same name. The film, whether tip-top or average, will gain a greater readership for this powerful novel. It is a story of crude and bizarre acts of violence, of mythic beings involved in the actions of Lakota people that are strange and unacceptable. Skins offers a fascinating sense of Lakota mythology, for its spiritual outlook, in which fragmented abstract reasoning and the law coexist with the splintered traditional system of beliefs left to the Lakota people being engulfed by Anglo-American hegemony. Louis introduces his work with an important image, vital to perception of the whole, in the quotation from the great Acoma poet Simon Ortiz: 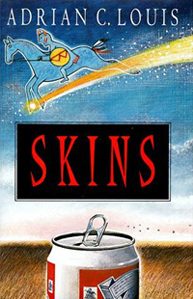 'At the Salvation Army a clerk
caught me wandering among old spoons
and knives, sweaters and shoes.
I couldn’t have stolen anything,
my life was stolen already.'

"The theme of systematic theft underlies all of the action in Skins. Myth, language, and perception are inseparable in Louis’s work. His use of Lakota terminology as well as English provides signs through which to experience a sense of reality that transcends material existence. From many common terms such as onsika (pitiful), and oyate (tribe) to Maka Ina (Mother Earth), and Inyan (the Rock), the reader is provided with a greater sense of clarity. An enlightening vision is put forth in a dream about a curse: Rudy [Yellow Shirt, the principal character] dreamed Indian blues: bitter dreams of broken arrows scattered in piles on the street corners, the dirt roads, the back alleys, and the cotton- wood valleys of his reservation. The arrows told the same old story: 'This road you are walking has no beginning or end. It’s an old Indian curse, but don’t worry: It’s a good curse.' The Lakota characters understand: 'Human beings did not rule the world: spirits did.' Skins depicts disorganized consciousness. It reflects a period and place where large numbers of the Pine Ridge Sioux no longer have hope in their lives. Their patience has worn thin. Their loyalty is to a partial value as an absolute—the self, a family, a lover, the customs of fellowship, the honor of a profession, or the claims of friendship. If the readers find it hard to look on Rudy’s actions as human, that is because they are not really granting Louis’s premises. If love were the highest value in the Lakota worldview, then the resolve for Rudy’s wives or brother would have been the correct one. But if there is the Wakan Tanka (the creator of all things, the Great Spirit, all wakan beings), which has an even higher claim on him, he can do no good for his loved ones by becoming their accomplice in violence, destruction, and adultery. The readers see the results of Rudy Yellow Shirt’s actions, but they do not know what would have happened if he had abstained. Only Wakan Tanka is sacred. This astonishing novel describes the very roots from which these human situations grow."
-Howard Meredith
World Literature Today