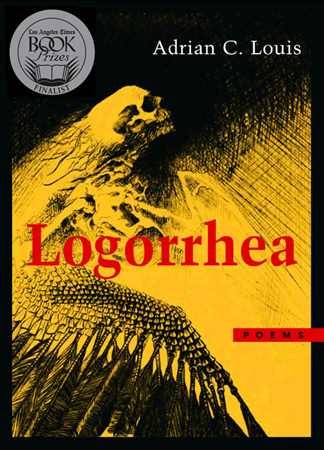 Logorrhea is a 2006 finalist for the Los Angeles Times Book Prize.


“With his customary mordant humor and beery weltschmerz, Louis writes in his new collection about lousy jobs undertaken to make ends meet, the perilous pleasures of alcohol, lost loves still pined for and loves far better forgotten, humanity’s twin addictions to money and brutality, and, most poignantly, the 'dark, violent red land' of America’s Indian Country; in particular the Pine Ridge Reservation in South Dakota, where Louis lived and worked for many years as a newspaper editor and teacher. Louis’s conversational style and salty language can bring Charles Bukowski to mind, but Louis is less prone to self-pity, and his indignation feels more righteous: 'We cannot tell you why we spent / a lifetime crawling when we / had wings that were strong, / supremely brown, and so holy.' Relatively new themes for Louis in this collection are the skulking approach of old age, and ever-sharper jabs at academia, portrayed here as a kind of intellectual rez where Louis has reluctantly taken refuge from poverty. Louis sometimes seems to strain to make his poems sound fancy, calling his television a 'cabled machine of thoughtlessness' and writing that after a poetry reading 'the congregation / adjourned to a local gin mill,' when he simply means the audience went to a bar. I don’t know why Louis thinks such rococo locutions are necessary, since his greatest strength as a writer is his point-blank bluntness, on particularly forceful display in the poems here about a loved one with Alzheimer’s: 'Two of your toes have curled / into claws — two of your fingers / did until they chopped them off. / God forgive me for okaying that.' In fierce and clear lines like these, Louis burns away all traces of mendacity and cant and shows us a scalded world made purer through his vision.”
-New York Times Book Review

“'You don’t grow older, you grow better,' they say. Several of these poems complain about 'the timely demise of King Louis, / the northern Nevada fuck machine.' 'God, what / a lard ass I’ve become,' Louis sighs, while of the woman he loves, he acknowledges, 'you cannot talk––little light / breaks in your eyes when I visit.' Yet he can dance for her, and she smiles. He can fit old stories with new barbs. As he tells 'The Scorpion and the Frog,' the frog’s been stung so often he’s immune to just one more––unfortunately. In 'Jesus Finds His Ghost Shirt,' Jesus notices Mary’s gone AWOL along the Via Dolorosa, retreats to the car, rummages in the backseat, and finds another means of resurrection. Louis can ponder defiance and failure, desire and incapacity. He can sound more than ever like his poetic peer, Charles Bukowski. But unlike Bukowski, he can speak, as a self-described half-breed Indian, out of a genuine community, however shattered, which makes him not better, perhaps, but more serious."
-Booklist

“I have long been a great fan of Adrian C. Louis’s work. From his poems about the desperate situation on the rez to his wise observations of American depredations of the land stolen from his people, he has always been an unflinching truth-teller and critic of the way we live. No longer just struggling to survive, in his latest poems he isn’t holding anything back-pouring out of him is a lifetime’s disgust, and rage-fighting words. Proud of his people, the old warrior, in the twilight of his virility that these poems bitterly illuminate, raises his anguished cry for life. With his new book, I want the country to know and celebrate this remarkable poet it has in its midst—literally and figuratively in the center of us all. He is a national treasure.”
-Edward Field

"This book is an indigenous flower blooming among hybrid roses. Unique, daring, blowzy, fragrant with life, it is flagrant truth-telling at its deepest, funniest, saddest, and best, a book we all long to read."
-Dorianne Laux

“What a book this is! In his new work, Adrian Louis has broken through to a new level of poetic expressiveness. Never fancy, his language is nevertheless fanciful, and his poems are even more trenchant, applicable, and dead-centered than ever. They are messages from the shabby town we have all seen next to the reservation.”
-Hayden Carruth

“Words pour from his mouth, nose, eyes, ears, heart….words that refuse to veneer or cover…words that punch us in the face and tickle our soles with no mercy. We cry, we laugh, we squirm, and we struggle to keep our heads above the water as we swim in the current of Logorrhea until we reach the shore and taste the delicious sweetness of the biting truth. This is Adrian Louis’ poetry, brutally unforgiving, fiercely tender and rewarding. A true master!”
-Wang Ping

"Adrian Louis's poetry is the half-bred howl and fully electric song of Indian country. I memorize and recite his poems in the same way that white college professors memorize and recite Yeats and Keats. Read these poems and listen carefully, sweetheart, because there's a Paiute boy slouching toward Bethlehem."
-Sherman Alexie

"Adrian C. Louis is a one-man wrecking crew who will change the face of poetry until we all wake up and honor him. His visions and choice of words are rhythmic, defiant, and timeless."
-Bloomsbury Review